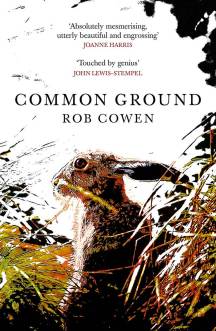 “Visceral and gripping, Common Ground marks out Cowen as a new writer who is both entertaining and significant.” Richard Benson, the Independent.

“One of the most original books of 2015.” Melissa Harrison, Books of the Year, The Times.

“Cowen’s relationship with this morsel of land is intense and honest, and described in superb prose…[he] has turned it into something not only rich and strange, but also astonishing.” Adam Thorpe, Resurgence & Ecologist.

“Absolutely mesmerising, utterly beautiful, utterly engrossing – it takes a lot for a book to give me goosebumps but this one did.” Joanne Harris, BBC Radio 2.

“Sensitive, thoughtful and poetic … leading us into a whole new way of looking at the world.” Michael Palin.

“This is writing of the highest order…he exists one step removed from the current nature writing world. Cowen writes as if from the subconscious, evoking those feelings many of us might experience but for which words and language so often feel just beyond reach. He’s an outlier, a Northern voice, a set of eyes on the soil, and Common Ground is his outstanding addition to – and expansion of – the canon.” Ben Myers, Caught By The River.

“[A] multi-faceted, touched-by-genius exploration of a stretch of Harrogate wasteland.” John Lewis-Stempel, Books of the Year, Sunday Express.

“Magical… Deeply original… a detailed nature study [and] a moving memoir… I became both intrigued and enchanted by this hybrid approach.” Sara Maitland, Book of the Month, Countryfile Magazine.

“Highly poetic… like an archaeologist, Cowen unearths histories, natural life and decayed infrastructure in a small area bordering the River Nidd… Above all, Common Ground is about the transformative power of this unnoticed piece of land, if one can only stand and stare for long enough.” Serena Tarling, Financial Times.

“Marvellously moving, this thrilling book is as big as any I know…heart-stoppingly beautiful.” Tim Dee.

“Wild and unusual. An author coming into his real story, leaping over the space between animal and human as though there were no difference between us.” The Observer.

“An eerie, haunting book…rendered with hair-raising, almost hallucinogenic, lyricism. Cowen moves through the seasons of the year and the creatures of the edgelands feeling, more than observing, how the circumstances of animal life mirror his own climb out of darkness.” Brian Bethune, Maclean’s.